The first merchant on Woody Island (as far as we can determine) was Robert Barrett, an immigrant from England. His business is thought to have been situated on Barrett's Point and was a barter system with fish being the main commodity. Besides being a businessman, Robert Barrett owned a lot of land and kept cattle and servants. He also owned two small boats, which he used to fish for cod and herring. Once when a young man named John Williams owed him money, but could not repay him, Mr. Barrett took John's land from him.

Robert then gave the land to his daughter, Sarah, and her husband, Philip Stacey. John Williams then left Woody Island for good and went to Pools Cove, Fortune Bay.

Soon after Robert Barrett died, another businessman moved to Woody Island, James Williams, often referred to as Jimmy. Jimmy's business was based on the same bartering system. Like the businessman before him, he handled mostly cod, lobster and herring. A little while later, two other businessmen also moved to Woody Island some time between 1905 and 1907. One of these was Tom Williams (no relation to Jimmy). Tom Williams had a store for Haystack islander, Tommy Wakely. The other business man was Dave Kelly. Dave Kelly was a Jewish man from Syran and lived in an area called Old Cove, on the Eastern end of the Island. Dave too, was called a barter businessman, with cod being the main commodity.

1910 was considered a good year. If you had one quintal (100 pounds) of fish, you could buy one barrel of flour, one gallon of molasses, and one pound of tea. At this time, raisins, pork and beef were all seven cents a pound, while kerosene was 18 cents a gallon. All cod that was caught was dried in order to preserve it for a longer amount of time and the fishermen had a credit account with the merchant. In the fall, all the fisherman's fish were turned in on the account. If there was a profit, it was taken up in goods from the merchant's store, as cash itself was very rare on Woody Island at the time.

In 1912, Robert Williams moved to Woody Island and opened his business which had formerly been located at Tack's Beach. It had formerly been run by a man named Brown for G.C. Fern in St. John's. When Brown died, Robert Williams took over the business for Fern and brought it to Woody Island. Fern stocked the store on commission which was was six cents to the dollar. The store carried more variety than the ones before it, having just about every kind of supply that was needed, but in small quantities. Cod, lobster and herring were then caught and exchanged by the fishermen. When G.C. Fern died, Robert Williams started selling for Dave Kelly on commission.

In the late 1920s Kelly's store was burned and Robert Williams moved to Sound Island. He started selling for Walter Beck, who had a large business there. Unfortunately, Walter Beck's business also burned in the early 30s and Robert Williams then started selling for E.H. Beck. This agreement lasted until 1939, when Robert's son, Bert, took over the business. Bert did not have his business on commission, and was instead independent. This store carried just about everything to meet the peoples needs, such as clothing , footwear, hardware, groceries, etc. This local store situated on the Western end of Woody Island and was used as a court room, a Sunday School and a gossip center. Gossip news traveled fast and some of the people on the island were praised, while others were cursed, with teachers and clergy not escaping comment. The store was a social gathering place and oftentimes people stayed there for lengthy visits to joke and carry on, but sometimes it was for more serious reasons. There was sympathy expressed as people felt and shared their fellow islanders burdens and joys. The businessmen very often took part in the conversations, as it was sometimes impossible not to. The owner, Bert Williams, was also lay-reader, church board chairman, member of the School Board and acted as adviser for people in conflict. He wrote letters, settled disputes and also forgave debtors. Bert's business lasted until centralization forced Bert Williams to move from the Island in 1969 along with many other people on the island.

Bert Williams also played an important part in transportation to and from Woody Island. He owned passenger boats, first The Kevin, then the Boston-built Thunderbird which replaced The Kevin in 1962. This passenger boat ran from Swift Current to Woody Island. The fee for the trip varied, but typically if a person went to Swift Current and came back the same day, his or her fee would be four dollars which was collected in an informal way.

Wilson Williams and Alec Lockyer also operated passenger boats and a business on the opposite end of the Island, known as Old Cove. Wilson Williams's business was similar to Burt Williams but he also sold dry goods and footwear. Wilson operated his business for approximately 40 years and was still maintaining a good revenue when resettlement began. In 1990, when it was about 65 years old, the wooden structure the store still remained on Woody Island. Wilson Williams also had boat called the Maggie Loretta which also ran from Woody Island to Swift Current. At one time, when bringing passengers from Swift Current, he noticed water running out underneath the bathroom door. Wilson investigated the source and discovered that one of his passengers sat on the cover of the toilet seat, instead of rising it up. He lost his boat in 1966 when it caught fire and burned. 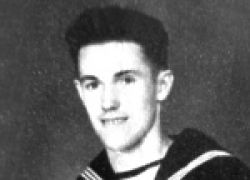 Alec Lockyer started a business when he returned home after serving in the Second World War in the British Navy. Alec joined the Merchant Marine in 1946 and the last trip he made was to sail around the world on the Island Side, owned by Atlantic Shipping. The journey took exactly nine months. They left Halifax January 1946, arrived in the Middle East through the Suez Canal, to the Red Sea, Gulf of Aiden, India, Philippians and China. They then sailed to the Caribbeans and then went across the Atlantic to Germany. From Germany, they went to London and arrived at Montreal October 5/46. Alec returned home in 1949 and bought with him a boat called the Galtire. He started a wholesale and distributor business for beverage sales which did quite well. In 1953, he started a retail and wholesale business on Woody Island, that consisted of groceries, hardware, and fishing supplies. This business was still in operation on Woody Island in 1978, ten years following the resettlement program for the few families that remained behind and the many that came back in the spring, summer, and fall to fish. Alec eventually expanded his store to other communities in Placentia Bay area as well.

Alec Lockyer owned a well-known boat called the "James & Lucy." The boat was loved and enjoyed by family and friends and was well known in most communities around Placentia Bay. The James & Lucy delivered the mail to thirteen post offices in Placentia Bay, twice a week, including Woody Island. The service it provided was commonly referred to as "The Arnold's Cove and Isle Valen water service." It was a year-round service, so they had to face the rough water and icy chill of the winter days, as well as the sun and rain of the summer. One winter's day in spite of 50-mile winds and sub zero temperatures, which covered his boat with inches of ice, Alec got the mail through. The service Alec and his boat provided was reliable and was considered an important service for the people of Placentia Bay. 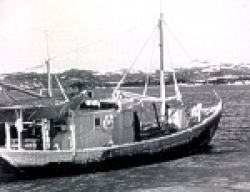