Religion played a large part in the lives of people on Woody Island. According to the Newfoundland census, most of the people on the Island were Protestants with a few Catholics. In 1935, there were 18 Roman Catholics on Woody Island.

The Roman Catholics consisted of the Mulroony, Country and Grunter families. However, when the Grunters moved away in 1935, very few if any Catholics were left on Woody Island. In the 1930s Pentecostal beliefs became popular and a Pentecostal church was built in 1935. Many of the people who were not accepting about this new denomination and they destroyed the "rafters" of this church when it was being built. However, when the church was completed and the congregation settled in, no major disagreements broke out.

Almost everyone went to church on Woody Island. Some people, especially the elderly, had special pews that they considered theirs. At one time an elderly man named Richard Allen looked after the church on Sunday. He was sometimes called Rick or Dick. So the saying went, "He was Rick or Dick all week and Mr. Allen on Sunday." 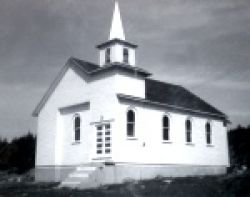