Most men on Woody Island were not businessmen, but fishermen. Cod was plentiful and considered a staple food for locals on Woody Island. All of the early settlers also grew potatoes, cabbage and a few other vegetables. The land and sea provided food as birds, rabbits, trout, caribou and berries supplemented the diet. People on Woody Island commonly raised horses, cows, goats, hens, and lambs. Many of the animals has various purposes, hens were not solely used as a food resource, their feathers were also used for pillows and mattresses for people living on the island.

Sheep were very important as their wool was used to make clothing to help keep people warm during the harsh winter.

While most of the animals were helpful, some could be a bit of a nuisance to the locals. The goats were fond of cabbage and were often caught stealing a few bites of fresh vegetables in neighboring gardens. When the first radio was had on Woody Island, one old lady not knowing what a radio was said, "I spose that's somethin' else to get in the garden and eat the cabbage." 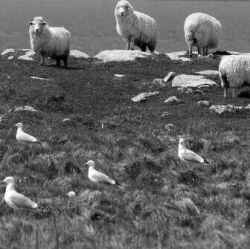